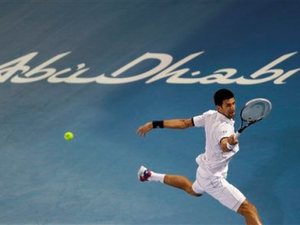 David Ferrer stunned fellow Spaniard Rafael Nadal in straight sets on Friday to set up a final showdown with world number one Novak Djokovic at the $250,000 three-day exhibition tournament here.

Two-time defending champion Nadal blamed a shoulder injury as the world number two trailed from the outset going 5-0 down in the first set.

"I was not in my best condition. I had a little trouble with my shoulder in the last month, but David was fantastic," said Nadal.

"Rafael has not been able to practice much because of his shoulder," said Ferrer.

"But I played very consistent and was happy with my match."

Earlier Djokovic showed no signs of the back and shoulder injuries which hampered his final months of last season as he took just 44 minutes to dispatch world number three Federer.

"Definitely an incredible performance. Lots of confidence if I continue playing like this," said Djokovic, the winner of three Grand Slam and five Masters titles for a 70-6 winning record last season.

"I expected him to be very strong again next year, and he's going to be tough to beat," Federer said.

Fifth-ranked Ferrer said he was relishing another clash with the world's top player whom he has a 5-6 record against and handed a rare defeat in the ATP World Tour finals in London last month.

"It will be very difficult. Novak is number one in the world. I will do my best to make a good match against him," warned the Spaniard.