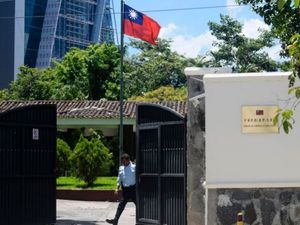 The United States on Friday recalled its envoys to three Latin American countries that recently switched diplomatic ties from Taiwan to China, saying it would hold consultations with the diplomats.

The move comes after Washington accused Beijing last month of destabilizing cross-Strait relations and engaging in a campaign of "political interference" by poaching Taiwan's allies in the western hemisphere.

"Our three chiefs of mission will meet with US government leaders to discuss ways in which the United States can support strong, independent, democratic institutions and economies throughout Central America and the Caribbean," it added.

Taiwan and China have been engaged for years in a diplomatic tug-of-war in developing countries, with economic support and other aid often used as bargaining chips for diplomatic recognition.

Beijing sees self-ruling, democratic Taiwan as part of its territory to be brought back into the fold and has not ruled out using force to do so.

Relations between Taipei and Beijing have worsened since Tsai Ing-wen came to power in 2016 as her government refuses to acknowledge that Taiwan is part of "one China."

El Salvador, which switched its ties in August, became the fifth diplomatic loss under Tsai's presidency and the third this year.

But while most countries have established formal relations with Beijing rather than rival Taipei in recent decades, Taiwan still has unofficial relationships with powerful countries.

Its most important unofficial ally is the US, which remains Taiwan's leading arms supplier, despite switching diplomatic recognition to Beijing in 1979.

Ties have warmed between the US and Taiwan in recent months, incensing Beijing.

Some analysts saw the poaching of El Salvador as an indirect slap in the face to President Donald Trump's administration and a warning against further friendly overtures.