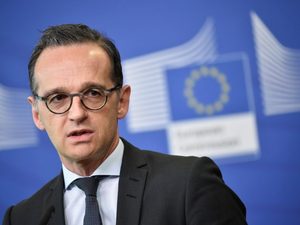 Germany is ready to contribute to rebuilding Syria if a political solution was found for fair elections in the country, Foreign Minister Heiko Maas said Friday.

Hours before the minister was due to meet his Russian counterpart Sergei Lavrov in Berlin, Maas appeared to answer a request made by Russian President Vladimir Putin in August for Europe to step up in reconstructing Syria.

"If there's a political solution in Syria that leads to free elections, then we are ready to take on the responsibility of reconstruction," wrote Maas on Twitter.

"It is in our interest for Syria to be a stable country. For that, reconstruction is necessary. And we have an important role in that."

At the same time, Maas also underlined Berlin's demand for Moscow to use its influence to get President Bashar al-Assad to back off from a looming major offensive against opposition-held Idlib.

"I will impress upon my colleague Lavrov our expectations that there should be no major offensive in Idlib," Maas wrote.

Russia-backed regime forces have massed around Idlib in recent weeks, sparking fears of an imminent air and ground attack to retake the last major opposition bastion.

During a visit to Berlin in August, Putin had called on Europe to fund the reconstruction of Syria to allow millions of refugees to go home.

"We need to strengthen the humanitarian effort in the Syrian conflict," he said then.

"By that, I mean above all humanitarian aid to the Syrian people, and help the regions where refugees living abroad can return to."

Germany has taken in more than a million asylum seekers since 2015, many fleeing wars in Syria and Iraq.

Chancellor Angela Merkel's decision to keep Germany's borders open at the height of the refugee influx deeply divided her country.

The UN has warned a full-fledged assault on Idlib could create the century's "worst humanitarian catastrophe", sending thousands more fleeing.

So is China, Russia and Iran not to mention Kurdistan and Azerbaijan. Funding for the rebuild will again come from the usual doner's who the Iranians and Syrians will call dirty names. Since the peaceful Islamic Republic of Iran paid the cost for the demolition of Syria they should be the ones footing the bill for rebuilding. Oh but I forgot Iran is bankrupt themselves and can hardly feed their own....

"It is in our interest for Syria to be a stable country. For that, reconstruction is necessary. And we have an important role in that."
.
Can German reconstruct the Cristhians Comunities in Nineveth !!!???