France Too Good for China at Hopman Cup 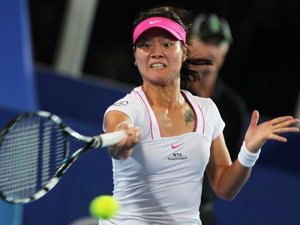 Chinese star Li Na asserted she is back in form after beating world number nine Marion Bartoli in three sets in the singles opening match at the Hopman Cup mixed teams tournament.

But the French fought back to level the tie when world number 19 Richard Gasquet cruised past Chinese youngster Wu Di in straight sets, 6-1, 6-3.

And the second-seeded French pair won the tie by easily claiming the deciding mixed doubles match with a 6-1, 6-1 win.

The fifth-ranked Li recovered from a service break down in the deciding set against Bartoli to win four successive games and beat the feisty Frenchwoman.

It was a fantastic fillip heading into 2012 for Li, who struggled after her breakthrough Grand Slam title in Paris in June.

A beaten finalist at the Australian Open in January, she won just seven of 16 matches for the rest of the season after the French Open, bowing out in the second round at Wimbledon and in the first round at the US Open.

Li admitted she struggled to cope with the extra attention and demands of being her country's first Grand Slam winner, but said she had benefited from off-season training in Europe and was ready to reproduce her best form.

"Life has changed. I lose concentration on the court. It is tough after you win a big title," she said after her win. "(But) I think I am back."

It took Li almost two hours to dispose of Bartoli, who has already been practicing in Australia for a couple of weeks.

A Bartoli double fault set up match point, and a wild forehand by the Frenchwoman handed Li the win.

Li said she paid the price early in the match for being too conservative in her play.

"She was playing more aggressive," Li said of Bartoli's performance in the first set. "But after three or four games I started to get better, it was a good end to 2011."