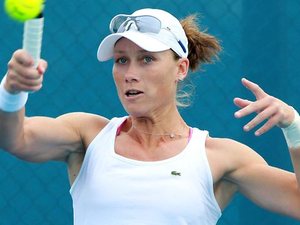 U.S. Open champion Samantha Stosur faces a difficult road in her first tournament of 2012, with Serena Williams, Australian Open champion Kim Clijsters and former No. 1 Ana Ivanovic on her side of the Brisbane International draw.

Williams, who hasn't played since losing the final to Stosur at Flushing Meadows in September, arrived in Brisbane on Saturday and will play Chanelle Scheepers of South Africa in the first round.

Ivanovic, the 2008 French Open champion and former No. 1, has been training on the Sunshine Coast north of Brisbane this month after spending Christmas with boyfriend and pro golfer Adam Scott.

She will play Austria's Tamira Paszek in the opening round, followed immediately by a possible meeting with Clijsters in the round-of-16.

"It doesn't get harder than that, but it's a good preparation for the Australian Open," Ivanovic said of her draw.

"It's a good way to check where you're at and if you want to get deep into a tournament, you have to face them at some stage, so why not sooner?"

Another Serbian former No. 1, Jelena Jankovic, will play Carla Suarez-Navarro of Spain in the first round. Jankovic could meet third-seeded Francesca Schiavone of Italy, who lost this year's French Open final to Li Na, in the quarterfinals.

"The first week of the year, nothing is ever a breeze. It's always tough and you never know how a lot of guys can improve in the offseason."