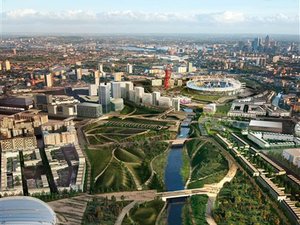 When Big Ben strikes 12 to ring in the New Year, no one will feel the level of anticipation — and pressure — more than organizers of the London Olympics.

With the arrival of 2012, the preparations will no longer be for "next year's games."

The Olympics will be THIS year, less than seven months away — exactly 209 days from Jan. 1 until the opening ceremony on July 27.

London has been preparing seven years for the games, ever since it defeated Paris in the final round of the International Olympic Committee vote in Singapore on July 6, 2005.

Now, the countdown is truly in the final stretch for the U.K.'s biggest peacetime exercise, or what organizing committee leader Sebastian Coe calls a "Halley's Comet" moment for Britain.

In a busy year that also will feature Queen Elizabeth II's Diamond Jubilee and the European Football Championship in Poland and Ukraine, the Olympics stand out as the marquee event of the summer of 2012, a sporting festival that will put London at the epicenter of global attention for 17 days.

The start of 2012 carries symbolic and psychological significance for Coe, a two-time gold medalist in the 1,500 meters who knows the feeling of entering an Olympic year as an athlete.

"For us there will be the realization that there are no more years now. We are down to days," Coe said. "This is the Olympics and it doesn't get any bigger, and the responsibility doesn't get any greater than this."

In concrete terms, London is in solid shape as it approaches the moment when it will become the first city to host the Olympics for a third time, after previous games in 1908 and 1948.

The biggest concerns weigh on less predictable factors: security and transportation. Will the games be safe from terrorist attack? Will London's already-stretched public transport network cope under the added strain?

Most of the venues are built and ready for the 10,000 athletes from more than 200 countries who will converge on the city next summer for 16 days of competition in 26 sports and 300 medal events.

"I feel relaxed but certainly not complacent," Coe said in a recent interview with The Associated Press. "We have big challenges, of course. Delivery of 26 world championships is never going to be a stroll in the park. We know these are the hard yards. There's nothing easy about the next few months."

A former industrial wasteland in east London has been transformed into the Olympic Park, a 1-square-mile area featuring several flagship arenas and representing the centerpiece of a long-term regeneration project for one of the most deprived areas of England.

Financially, London has managed surprisingly well during some of the worst economic conditions in decades, raising more than 700 million pounds ($1 billion) from sponsors.

"I really can't think of a game that has been delivered in a more difficult climate since Montreal," Coe said, referring to the debt-ridden 1976 Olympics.

Despite a public outcry over a ticketing system that left hundreds of thousands of applicants empty-handed, organizers raked in hundreds of millions more in revenues from ticket sales. The games are virtually sold out and Coe's privately-funded organizing committee, LOCOG, is on track to meet its 2.1 billion pound ($3.3 billion) operating budget.

The overall 9.3 billion pound ($14.6 billion) public sector budget for the Olympics remains intact, although things are getting tight. Government auditors recently warned there is a "real risk" that more taxpayer money could be needed to cover the bills.

Most of the budget pressure comes from extra security costs, which have ballooned to more than $1.6 billion. The planned number of security guards at venues has risen from 10,000 to 23,700 — on top of 12,000 police on the streets. Up to 13,500 military personnel will be deployed, a warship stationed on the Thames and fighter jets on standby.

The security threat was brought home the day after London was awarded the games, when homegrown suicide bombers attacked the city's Underground and bus network, killing 52 people on July 7, 2005.

The challenge for organizers and security chiefs in 2012 will be to keep the games safe without locking down the city or turning it into an armed camp.

"This is a sporting event with a security overlay, not a security event where a bit of sport will be played," Chris Allison, assistant commissioner of the Metropolitan Police, told The Times. "We don't want to close down London.

"If people can't go about doing their daily business, then that is as much a victory to the terrorists. We want policing that is visible, reassuring and a deterrent, but not oppressive."

Keeping the city moving during the games shapes up as another priority. Transport officials expect an extra 3 million trips a day on public transit. Some Underground stations will face overcrowding and long lines. The potential for strikes is not ruled out. On the roads, drivers will cope with Olympic route networks and designated lanes.

Olympic organizers have enjoyed a relatively controversy-free run, without the construction delays that dogged the 2004 Athens Games or the human rights issues that erupted ahead of the 2008 Beijing Games. In addition to the ticketing complaints, London has endured protracted wrangling over the future of the Olympic Stadium. There have been protests in India over Dow Chemical's sponsorship of a decorative wrap around the stadium because of the company's ties to the 1984 Bhopal gas leak.

After the grandiose 2008 Olympics, where money was no object, London organizers have stressed they won't try to compete with the epic scale of Beijing and will instead bring their own British touch and identity to these games. The tone will be set by an opening ceremony directed by Oscar winning filmmaker Danny Boyle.

Above all, London is promising games that are fun — packed venues, live sites and giant screens across the city, culture and entertainment, a party atmosphere day and night.

And, at a time of economic gloom and austerity in Britain, Coe wants to deliver an event that "lifts the spirit of the nation."

He has repeatedly said that Britain is a country of "slow burners" but expects public enthusiasm will soar once the Olympic flame arrives at Land's End in Cornwall on May 19 to herald the start of a nationwide torch relay.

Before then, it's time to pop the corks and check the calendar. 2012 is here.