United Slip up as Chelsea Crash to Villa 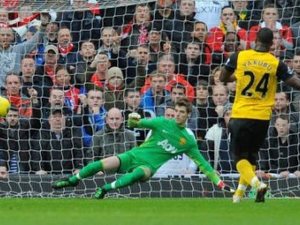 Manchester United missed the chance to start the New Year on top of the Premier League after suffering a 3-2 defeat to Blackburn as Arsenal went fourth after Chelsea crashed 3-1 at home to Aston Villa.

With Manchester United manager Sir Alex Ferguson celebrating his 70th birthday at Old Trafford, the stage was set for United to open up a three-point lead against crisis-hit bottom club Rovers.

But an 80th-minute winner from Grant Hanley settled a pulsating game in Rovers' favor after two goals from Dimitar Berbatov had helped United fight back from 2-0 down after Ayegbeni Yakubu's double for Blackburn.

"It is a disappointment," said Ferguson. "I never expected it. We lost two terrible goals and you can't do that."

The defeat means league leaders Manchester City can go three points clear of United if they defeat Sunderland on Sunday.

Blackburn manager Steve Kean -- who has faced months of abuse from Rovers fans seeking his dismissal -- meanwhile said he hoped the win would bring the club's supporters together.

"I hope, in time, the fans who have been negative will turn as well and be with us and make a real intimidating atmosphere at Ewood Park," Kean said.

"If the players carry on playing without fear, as we did today, we will climb the table."

A disastrous afternoon for Chelsea saw Aston Villa come from behind to score a stunning 3-1 win at Stamford Bridge.

Didier Drogba shot Chelsea ahead from the penalty spot on 28 minutes after being brought down in the area by Richard Dunne.

But Villa silenced the home crowd just five minutes later when Stephen Ireland rifled home a rebound after his first effort had cannoned off John Terry on the Chelsea goal-line.

And two goals in the final seven minutes from Stiliyan Petrov and Darren Bent handed Aston Villa victory as boos rang out around the ground following a fourth game without a win.

"I thought in the end we deserved it. We looked very dangerous on the break," Villa boss Alex McLeish said.

"We need to improve on a couple of aspects and we know what they are. Villa punished us well in the final stages of the game."

Arsenal were the main beneficiaries of Chelsea's loss, Robin van Persie bagging his 35th Premier League goal of 2011 as Arsenal downed QPR 1-0 at the Emirates to move into fourth spot.

Wenger meanwhile paid tribute to the way his team fought their way into contention for a top four finish after a disastrous start to the season.

"I give credit to these players, they have been 17th and 18th in the league and no-one talked, they just focused and there is formidable spirit," he said.

Arsenal's win also saw them gain ground on third placed Tottenham, who had to settle for a 1-1 draw at Swansea after Scott Sinclair's late goal for the Welsh club cancelled out Rafael van der Vaart's opener for Spurs.