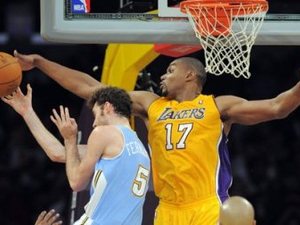 Kobe Bryant and Andrew Bynum powered the Los Angeles Lakers past Denver 92-89 on Saturday, a victory sealed when Denver's Danilo Gallinari botched a game-tying layup in the closing seconds.

Bynum scored a game-high 29 points and grabbed 13 rebounds while Bryant added 17 points, 10 rebounds and nine assists for the Lakers, who improved to 3-2 while the Nuggets fell to 2-2.

Bryant sank a pair of free throws to level the game at 89-89 and Bynum followed by blocking Denver's Nene and then putting the Lakers ahead to stay at the other end of the court with a layup.

Denver's Ty Lawson missed two free throws and both Gallinari and Al Harrington missed 3-pointers, but Bryant missed a jumper with 11 seconds to play and the Nuggets found Gallinari on a fast break.

The Italian playmaker moved to the basket for an uncontested layup but his left-handed shot clanked off the rim and bounced out.

Bryant sank a free throw with one second remaining for the game's final point and Harrington, who led the Nuggets with 21 points, missed a desperation three-pointer from near mid-court at the final buzzer.