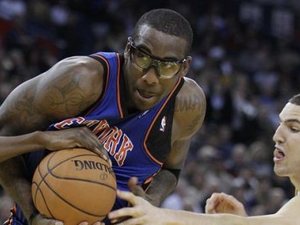 Knicks coach Mike D'Antoni said the playmaker's availability will be decided on a day-to-day basis after he was hurt in a 99-82 loss to the Los Angeles Lakers. Stoudemire did not take part in a team workout on Friday.

The Knicks, who began the season last Sunday with a home victory over Boston, had already been hit with injury setbacks.

Forward Jared Jeffries is out for up to two weeks with a strained right calf and guard Iman Shumpert has a right knee sprain that will sideline him for two to four weeks.

Josh Harrellson was named to replace Stoudemire in the starting lineup against the Kings, the closing game in a west-coast road swing for the Knicks.