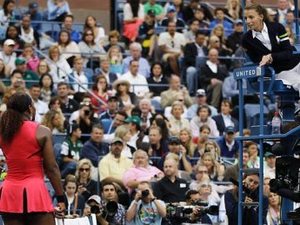 Serena Williams says she doesn't regret her outburst during last year's U.S. Open final and warns she would do it again if her emotions are as high as they were during her loss to Australia's Samantha Stosur.

Williams reacted angrily when chair umpire Eva Asderaki ruled that her shout of "come on!" after hitting a forehand was a hindrance and awarded a point to Stosur.

Following the ruling Williams directed a torrent of abuse at Asderaki -- including calling her a "hater" and "unattractive inside" -- and was subsequently fined for the outburst.

But speaking before her first round match at the Brisbane International, Williams said she couldn't see anything wrong with her actions.

"I honestly think I was really toned down, like I didn’t use any bad language or anything so I wouldn’t change it so much," she said.

"When you’re (full of) emotion that’s kind of how you feel.

"I love that and I think people can respect that when they see me play."

Williams takes on South Africa's Chanelle Scheepers on Monday and could play Stosur in the semi-finals if the draw goes according to the seedings.