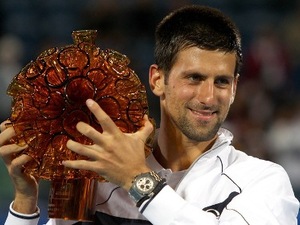 "It's always great to win a title. This is the best way to start the 2012 season," Djokovic said. "I must say I'm really happy with the way I'm playing. Playing against the top players in the world in this way gives me a lot of confidence."

The fifth-ranked Ferrer had upset second-ranked Rafael Nadal in the semis but couldn't find an answer for Djokovic, who broke the Spaniard five times and took 3-0 leads in both sets.

Earlier, Nadal shook off an ailing shoulder to beat Federer 6-1, 7-5 to claim third place in the $250,000 winner-takes-all six-man tournament which is treated as a warm-up for the new ATP season.

Djokovic said he was feeling better than he did at this stage last year and that he was "surprised" by how well his preparations were going, coming off a year in which he won three Grand Slam titles and amassed a 70-6 record.

The 24-year-old Serb struggled toward the end of the 2011 season, with four of his six losses coming after the U.S. Open as fatigue and minor injuries caught up with him. He came into Abu Dhabi saying he was still not 100 percent match fit, but said he now feels ready to defend his title at the Australian Open next month.

"Usually at this stage, you are trying to find your speed on the court, agility, just dynamics of every stroke," Djokovic said. "But I found it already, to be honest, right away after the first match ... It's a great way for me to prepare for Melbourne."

The fifth-ranked Ferrer conceded he was outmatched.

"He was better than me. He played a really good match," Ferrer said. "I tried but maybe I played at a deficit all the time. I fought but with Djokovic at the moment it's difficult to beat him."