Clijisters Wins Easily in First Round at Brisbane 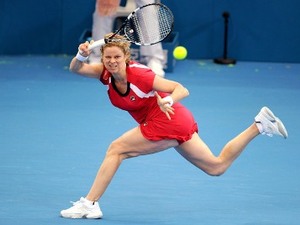 Kim Clijsters began preparation for the defense of her Australian Open singles title with a 6-1, 6-4 win over Romania's Simona Halep in the first round of the Brisbane International on Sunday.

"I felt that I was playing aggressively and moving well, so I was pretty satisfied," Clijsters said of Sunday's win.

She also said the abdominal problem that forced her to retire from a number of tournaments, including the U.S. Open, in 2011 had left no lingering problems with her serving action.

"I felt confident with my serve. I think that's something that, in the past, wasn't always the case," she said.

In another match Sunday, 2010 French Open champion Francesca Schiavone of Italy advanced to the second round when her opponent, Ksenia Pervak of Russia, retired with a headache at 4-4 in the opening set.