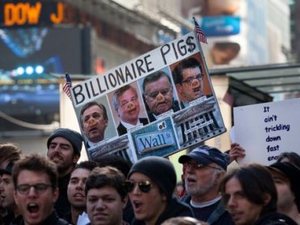 The arrests included one man held after allegedly stabbing a police officer in the hand with scissors.

"There were 68, including one felony assault," a spokesman for the New York Police Department said. "They were mostly charged with disorderly conduct, resisting arrest, and obstruction of government administration."

Hundreds of supporters of the Occupy movement, which argues that the country's financial and political elites have too much power over ordinary people, went to Zuccotti Park in the Financial District to celebrate New Year's Eve.

However, scuffles broke out when protesters tried to remove metal barricades lining the exterior of the square, where the OWS movement first gathered in September and stayed camped until being evicted by police in November.

Police quickly moved in to make arrests, sparking tense confrontations into the small hours of Sunday.

The OWS website's live reports on the events said that more than 30 people had been held in "mass violent arrests."

The Occupy movement took its cue from mass protests against budget cuts and unemployment in Europe and says it is also inspired by democracy revolutions in North Africa.

However, since U.S. cities began evicting permanent protest camps in parks from New York to California, the movement has lost much of its steam.