Top-Form Serena Out of Love with tennis 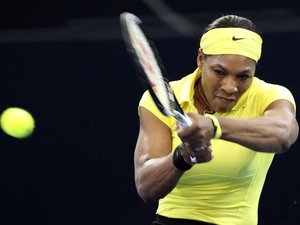 Serena Williams says she has fallen out of love with tennis despite recording an impressive comeback win over Chanelle Scheepers in the first round of the Brisbane International on Monday.

Playing her first match since losing the U.S. Open final to Samantha Stosur in August, Williams showed why she is the most feared player in the draw as she outgunned Scheepers 6-2, 6-3.

Williams, who missed the last four months of 2011, struggled at times with her first serve but still had too much firepower for the South African, sending down seven aces in the 68-minute victory.

The 30-year-old revealed later she was cutting her schedule back in 2012 as she prepares for life after tennis.

"I just want to be able to do other things that I'm doing and expand on that. I think that helps keep my motivation up," she said.

Williams, who has won 13 Grand Slam singles titles, admitted she took the latter part of 2011 off because she was tired and said she did not love the sport any more -- if she ever had.

"I don't love tennis today but I'm here," she said.

"It's not that I've fallen out of love with it. I've actually never liked sports and I never understood how I became an athlete.

"I don't like working out, I don't like anything physical. If it involves sitting down or shopping, I'm excellent at it."

Australia's Stosur, the tournament top seed, demolished a gallant Anastasiya Yakimova of Belarus 6-2, 6-3 and remains on track for a possible semi-final clash against Williams.

Playing her first match in Australia since winning the US Open, Stosur wasted no time reaching the second round to the delight of her home fans in a packed Pat Rafter Arena.

Petkovic, the runner-up in 2011, had problems with her serve throughout the first two sets but recovered in the third to outlast Peer in two and a quarter hours.

Former world No.1 Ana Ivanovic breezed into the second round with a 6-3, 6-3 win over Austrian Tamira Paszek.

Ivanovic raced through the first set then recovered from a slight wobble in the second to wrap up the match in 79 minutes.

"I really felt I played well and applied a lot of things that I have worked on," the 24-year-old Serb said.

"Still, there is room for improvement but it is the first match (of the year) and I'm very, very happy to be through."

Ivanovic next plays Belgium's Kim Clijsters in a mouthwatering second round clash.

Fellow countrywoman Jelena Jankovic joined Ivanovic in the second round with a 6-4, 6-2 win over Spaniard Carla Suarez Navarro.