Jordan Flood Death Toll Rises to 20, Most of Them School Pupils 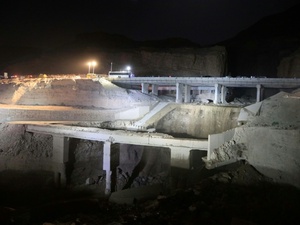 At least 20 people, most of them school pupils, have been killed in flash floods in Jordan, the emergency services said Friday in an updated toll.

A further 35 people were injured following heavy rains on Thursday, including members of the security forces involved in rescue operations, said an official from the civil defence -- Jordan's fire service -- who asked not to be named.

He said rescuers were still searching for people missing in the area, a popular tourist attraction around 50 kilometres (30 miles) west of Amman.

"Most of the dead were schoolchildren aged 11 to 14 who were taking part in a school trip to the Dead Sea region" when their bus was swept away by floodwaters.

Also among the dead were passers-by who had been picnicking in the area, he said, adding that a nearby bridge had collapsed.

"Security force personnel who were taking part in the rescue operations were among the injured," he added.

The Dead Sea, the lowest point on earth, is surrounded by steep valleys and gullies that frequently see flash floods and landslides.

He said the bus took a route not agreed upon by the ministry and the organiser of the trip bore full responsibility.

Roads leading to the area were closed on Friday morning "to allow the continuation of search and rescue operations", the Directorate of General Security said.

The Israeli military said on Thursday it was helping with the operation, sending helicopters and forces specialised in search and rescue.