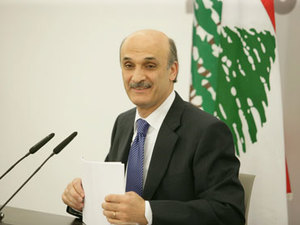 Lebanese Forces chief Samir Geagea on Monday said his party will be more useful from inside the government, noting the LF decision to partake in the future government dismissing all doubts a day earlier that it would do otherwise.

“The Lebanese Forces decided to participate in the government despite injustice made to us, because our presence from within is more useful,” declared Geagea in a press conference.

He listed the number of ministerial portfolios allocated for each parliamentary bloc in comparison to those allocated for the LF. He said the Strong Lebanon bloc (of the Free Patriotic Movement) alone, was allocated three key portfolios.

Pointing to attempts to exclude the party from the future government, he said: “Their intentions are to exclude us because we have proven ability to stop bargains mainly the ones linked to the electricity deal.”

He said the six-month delay to shape the government was the result of attempts to undermine the LF.

The LF has agreed to be given the deputy prime minister post, the ministerial portfolios of social affairs, culture, and labor which President Michel Aoun (FPM founder) has claimed before.

Japan in its entirety is run on the efforts of 12 ministers. Lebanon has about 10 times that number for about 4MM people. But to be factual and fair our ministers are not there to serve the nation but to be served by the nation.

He sold out for what he he wanted the Presidency. Lebanon has proven yet again that it is nothing more than a banana republic. For crying out loud Gaza has more electricity available than Lebanon need I say more...

He can continue to dream about it.

Your right Canada, if it can happen anywhere where a convict can become a president then Lebanon is where it could happen. After all we have a failed dictator in his mid 80's as a quisling president why not a convict or even a convicted Drug lord from the Bekaa? (assuming we find a good Maronite Drug lord)

True on that SOS not many like 3oun the quisling. He ran away and left his soldiers to be slaughtered or captured by the Syrian regime...refused to let their mothers even inquire about them stating their cases have been closed. What a megalomaniac!