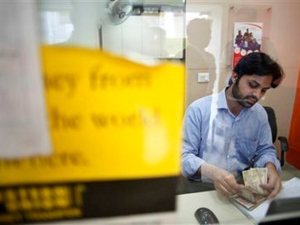 India will allow individual foreign nationals to invest directly in its stock market in a bid to attract more funds and reduce market volatility.

The announcement late Sunday follows a year of large losses on the Sensex, India's benchmark index. The new regulations will come into effect January 15.

So far, foreign individuals have been limited to investing in the country's stock markets indirectly through mutual funds.

A government statement said the change is intended to help combat market volatility and increase the flow of foreign funds into the country.

India's benchmark Sensex index fell more than 22 percent in 2011, making it one of the worst performing in the region. The rupee also lost about 14 percent this year and recently hit a lifetime low, breaching 54 rupees to the dollar.

This is the weakest the rupee has been since it was allowed to float against the dollar in the early 1990s.

After several years of 8 percent growth, the Indian economy has slowed down. The Ministry of Finance last month trimmed its growth projection for the fiscal year through March to around 7.5 percent, down from an earlier forecast of 9 percent.

Growth in the September quarter slipped to a two-year low of 6.9 percent and industrial production fell 5.1 percent in October, its first contraction since June 2009.