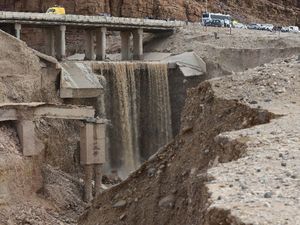 Five people have already been confirmed dead in the area southwest of the capital Amman after torrential rains swept the south of the kingdom.

To the east, three people were killed near Dabaa on the Desert Highway, one of Jordan's three main north-south arteries, while one was killed near Maan in the south.

Government spokeswoman Jumana Ghneimat said the highway was cut in both directions.

The Jordanian army deployed helicopters and all-terrain vehicles to help with the search and rescue operation.

A rescuer was also among the dead, the civil defence spokesman said.

State television said the waters had reached as high as four metres (13 feet) in parts of the red-rock ravine city of Petra and the adjacent Wadi Musa desert.

It broadcast footage of tourists sheltering on high ground on both sides of the access road to Jordan's biggest attraction.

Designated a UNESCO world heritage site in 1985, Petra draws hundreds of thousands of tourists a year to its rock-hewn treasury, temples and mausoleums.

Its buildings have been used as sets for several Hollywood blockbusters including Indiana Jones and the Last Crusade.

The latest deaths come after October 25 flash floods in the Dead Sea region of the kingdom killed 21 people, most of them children on a school trip.

Jordan's education and tourism ministers both resigned last week over failings in the government's response to those floods.