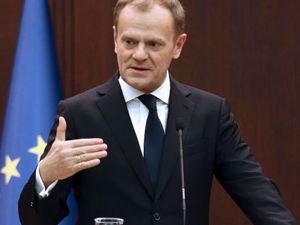 EU President Donald Tusk on Thursday confirmed the bloc would hold a special summit to seal the hard-fought Brexit agreement with Britain on November 25.

Tusk's announcement will come as a boost to British Prime Minister Theresa May as she begins the daunting task of selling the deal to a fractious parliament where she faces resistance from arch Brexiteers and EU supporters alike.

Ambassadors from the 27 remaining EU states will meet by the end of the week to share their analysis of the withdrawal deal, Tusk said, adding that he hoped "there will not be too many comments".

They will also take stock of work on the "Joint Political Declaration" about future relations between Brussels and Britain, which Tusk said should be finalised with London by Tuesday and then analysed by member states' officials.

"Then if nothing extraordinary happens, we will hold a European Council meeting in order to finalise and formalise the Brexit agreement. It will take place on Sunday the 25th of November at 9:30 am," Tusk told the press alongside EU chief negotiator Michel Barnier a day after the 585-page withdrawal agreement was approved by the British cabinet.

Tusk paid tribute to the work of Barnier and his team, who he said had "ensured the limitation of the damage caused by Brexit" and secured the interests of the EU.

Barnier said the deal was "fair and balanced", though it has caused uproar among Brexit supporters in May's government who accused her of betraying the June 2016 vote to leave the bloc.

The deal covers citizens' rights, Britain's financial settlement and plans for a post-Brexit transition period during which both sides hope to agree a new trade deal.

The most controversial element is a "backstop" plan to keep Britain in a customs union with the EU until a trade deal is agreed that avoids the need for border checks with Ireland.

Many Brexiteers fear this would leave Britain a "vassal state", tied to the bloc indefinitely.