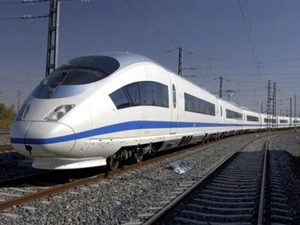 Germany was plunged into transport chaos Monday as train services were halted by a railworkers' strike over pay, affecting millions of passengers.

Inter-city and regional services as well as many urban commuter trains were cancelled throughout Europe's biggest economy by the four-hour stoppage that started at 05:00 am (0400 GMT), Deutsche Bahn (DB) said.

Although the walkout ended as planned at 09:00 am, its ripple effects will be felt for the rest of the day, particularly on long-distance lines, rail operator DB warned.

Some 1,400 trains, including cargo services, were affected, DB said, adding that both sides had agreed to return to the negotiation table on Tuesday.

The industrial action came after talks broke down Saturday between the DB and the EVG railworkers' union, which is demanding a 7.5-percent salary rise for 160,000 employees.

"The next move is now up to Deutsche Bahn management."

DB had earlier described the strike as a "completely unnecessary escalation" in the tortuous negotiations.

DB has so far offered a pay rise of 5.1 percent in two phases, with an option for staff to take extra time off instead, and a one-off payment of 500 euros ($570), DPA national news agency reported.

A DB spokeswoman welcomed the decision to resume talks on Tuesday.

"We never left the negotiating table," she told AFP. "We have told the union that we are prepared to make another offer."

Major transport hubs like Berlin, Frankfurt, Cologne and Munich were among those impacted by the walkout.

DB said that purchased tickets would remain valid until next Sunday or could be refunded and urged passengers to delay travel where possible.

In the capital Berlin, where additionally the entire public announcement system broke down, frustrated morning commuters were asked to switch from S-Bahn commuter trains operated by DB to subways, buses or trams.

At Nuremberg station, in the southern state of Bavaria, some 50 rail workers were seen demonstrating in yellow high-visibility vests, similar to the ones donned by anti-government protesters in France.

It is not unusual however for German rail staff to wear hi-vis jackets, and it was not immediately clear if the demonstrators intended to signal a link with the French street protests.

"One for all and all for one" read the signs held aloft by the demonstrators.