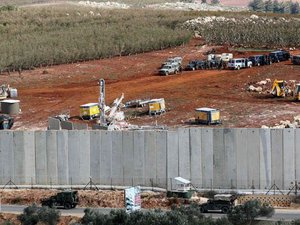 An Israeli army delegation will head to Moscow on Tuesday to brief their Russian counterparts on operations to destroy Hizbullah tunnels from Lebanon, the military said.

"An Israeli army delegation composed of senior officers and led by the head of army operations, General Aharon Haliva, will fly to Moscow on Tuesday," the military said in a statement.

"During the day-long visit, the delegation will brief their Russian counterparts on Operation Northern Shield and other operational issues," said the statement issued on Monday.

Ties between Israel and Russia have been strained since the accidental downing of one of Moscow's transport planes on September 17 by Syrian ground batteries killed 15 service personnel.

Moscow pinned responsibility for the incident on Israel, saying its fighter jet used the larger Russian plane for cover, an allegation Israel disputed.

The Kremlin said on Saturday that Netanyahu had called Putin to discuss the operation against alleged Hizbullah tunnels.

During the conversation, Putin stressed "the need to ensure stability along the dividing line between Israel and Lebanon", according to Russia's embassy in Israel.

Netanyahu for his part reaffirmed Israel's policy of preventing the establishment of an Iranian presence in Syria and to "act against the aggression of Iran and Hizbullah".

Israel occupied parts of Lebanon for 22 years until 2000, and the Iran-backed Hizbullah movement claimed credit for its withdrawal following persistent guerrilla attacks.

The two countries are still technically at war but the border has remained relatively calm in recent years.

Russia is fighting on the same side as Iran and Hizbullah in support of President Bashar al-Assad in Syria.

You and your cult represent the epitome of treason.

Traitors to whom? The Resistance defends Lebanon.

Traitor to Lebanon يا حريه, add a dot on the ح just for you.

The traitors are you that favors Israel, I got the Lebanese state on my side in that.

Mystic "The two countries are still technically at war."
For two entities to be at war they must be countries. So using this comment you are finally admitting that Israel is a country. As Neil Armstrong said on the Moon "A small step for man, a giant step for mankind"

s.o.s. - What about the compensation for ther 850,000 Jewish refugees from the Arab States (including Lebanon) who were forced to leave the countries after 1948 and all their property was left behind. The amount of compensation for both sides should be about the same.

We are Lebanese and unlike you Iranians are free to express our will. The laws you have put in place have not yet taken away our freedom of speech ya Ali. Conversely try practicing freedom of speech in Iran Kid.

Why are you all in a huff about a statement made by a child about our freedom of speech? let Ali blurb hes only doing it as he has no other choice for a teen supporter who is blinded by religious hatred. Israel is there for him to put on his flip flops and march south to liberate. Hes just a child let him be.

You pledge allegiance to Iran first then to Lebanon. When do you put Lebanon first then you deserve to live in it.