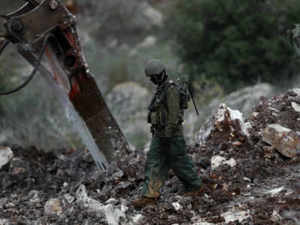 After recent reports that alleged tunnels were dug from Lebanon into the occupied territory of Palestine, Russia has reportedly told Lebanon that it is “forbidden” to tamper with the UN Resolution 1701 related to the situation on the border between Lebanon and Israel, the Saudi Asharq al-Awsat daily reported on Monday.

The daily said that the “Russians have sent a message to the Lebanese side saying it’s forbidden to tamper with the resolution related to the situation on the Lebanese-Israeli border.”

Said remarks come after the recent Russian-Israeli Military Security Committee meeting, during which Tel Aviv provided Moscow with details of the tunnels that were recently discovered across the border, added the daily.

Apart from Hizbullah’s responsibility for the tunnels, the Russian side has reportedly asked Lebanon to deal with the issue through three proposals, the daily quoted unnamed sources as saying.

The first is the need to maintain the rules of engagement in the area covered by 1701, and to instruct the Lebanese army to deal with the matter and remove the causes of tension, which constitutes a commitment to the decision issued after the July 2006 war, they said.

They noted that the subject will be on the table of the Security Council within two days, to condemn "the tunnel issue.”

United Nations Security Council Resolution 1701 is a resolution that was intended to resolve the 2006 Israel-Lebanon conflict.

It required all armed groups except the official Lebanese military to remain north of the Litani River following the end of the 2006 Second Lebanese War.

On December 4, the Israeli army announced an operation dubbed "Northern Shield" to destroy tunnels it said have been dug under the border by Hizbullah.

Hasabala rock band will always entertain its fans for free anywhere / anytime and all these resolutions are garbage and nonsense.. thanks due to the gov of Leb for keeping itself in deep sleep or rather in coma..

So even the Russians now state categorically that the Lebanese side by the fact that the army does not prevent armed hizballah activities south of the Litani is in contravention of Resolution 1701.