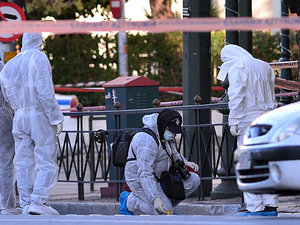 A homemade explosive device went off early Thursday in front of a church in central Athens injuring its caretaker and a police officer, police said.

The explosion happened at 7:10 am (0510 GMT) in the upmarket Kolonaki area, police said, adding that an arterial road had been sealed off.

The police officer was hospitalised with minor injuries to his face and hands sustained when he went to inspect a "suspicious" package after being alerted by the caretaker.

The caretaker was also hospitalised.

A worker at a cafe near the church told Skai television that the blast had been "powerful."

Non-fatal attacks targeting centres of power and embassies have been common in Greece in recent years, often blamed on anarchists or far-left groups.

Ten days ago, a homemade bomb exploded outside the headquarters of the Skai media group in a seaside Athens suburb causing major damage. There have been no claims of responsibility.