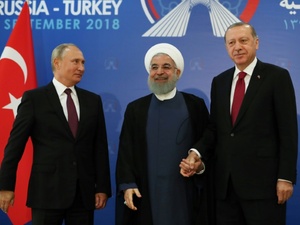 Moscow will early next year host the leaders of Russia, Iran and Turkey to discuss the Syrian conflict, Russia's deputy foreign minister said Friday, after the United States announced it was withdrawing troops from the country.

"It's our turn to host the summit... around the first week of the year. This will depend on the schedules of the presidents," Mikhail Bogdanov was cited as saying by Interfax news agency.

The meeting will be the latest step in the Astana peace process -- set up in early 2017 by Russia and Iran, who support President Bashar al-Assad's regime in Syria, and opposition backer Turkey.

The Astana process was launched after Russia's military intervention in Syria tipped the balance in the Damascus regime's favor. It has gradually eclipsed an earlier UN-sponsored negotiations framework known as the Geneva process.

A Turkish delegation comprising foreign minister Mevlut Cavusoglu and defense minister Hulusi Akar is due in Moscow on Saturday to discuss the pullout of 2,000 U.S. troops from Syria announced last week by President Donald Trump.

Russian Foreign Minister Sergei Lavrov on Friday refused to comment on the move saying he was "waiting for actions to follow words."

"The Americans don't always do what they promise, far from that," he said. "Washington clearly wants to pass on the responsibilities on the ground to its partners in the coalition."

The last meeting between Russia's Vladimir Putin, Iran's Hassan Rouhani and Turkey's Recep Tayyip Erdogan took place in Iran in September with the fate of the rebel-held Idlib province dominating the agenda.

Trump in a shock announcement recently said he was pulling out some 2,000 American soldiers from Syria, claiming the Islamic State jihadists had been defeated.

Dudes!!... This is so unexpected and sweet.. also very progressive.. not that there's anything wrong with that... Captured in a tender moment.. the lovers holding hands.. and the big smile... Usually this requires two witnesses.. never mind... Mr Putin is like two anyway lol.. he can be both.. best man and maid of honor lol... Do I spy a bit of envy in Mr Putin's gaze?... Recep Tayyip looks so handsome in his smart suit.. and Hajj Rouhani.. I wonder who he's wearing.. looks pretty as a picture.. and blushing.. in his gown.. and veil.. warped around his head like a turban for some reason... My heartfelt congratulation to the groom and.. the groom... I'm a bit embarrassed as I didn't bring them anything.. Mabrouk and Yassou!...