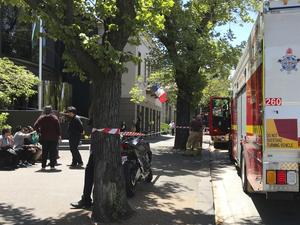 Australian police are investigating the delivery of suspicious packages sent to foreign embassies and consulates in Melbourne and Canberra, police and embassy sources told AFP Wednesday.

The packages -- which are still being examined but are not believed to be harmful -- were delivered to facilities in the capital and several addresses across the southern Australian city, police confirmed.

"The packages are being examined by attending emergency services," the Australian Federal Police said in a statement.

The British consulate in Melbourne was among those targeted.

"We are liaising closely with the (Australian Federal Police) and the local authorities regarding the situation. All our staff are safe and accounted for," said a British High Commission spokesperson.

The US consulate in the city said it also received a "suspicious" package, which a spokesperson said was handled in coordination with the Melbourne Fire Brigade and the Australian Federal Police, who were "investigating the incident".

Vic Emergency, a government response agency, reported several instances of hazardous materials being found across the city on Wednesday, including near the Spanish, Japanese, Egyptian, Indian and Pakistani consulates.

"The circumstances surrounding the incidents are being investigated," said the Australian Federal Police.