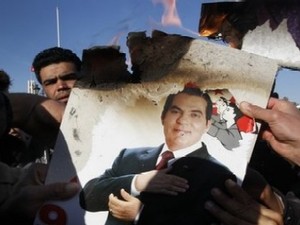 Europe's foreign ministers on Monday froze the assets of ousted Tunisian leader Zine El Abidine Ben Ali and his wife in response to a request from the Tunisian authorities.

The sanctions against Ben Ali and Leila Trabelsi were decided at a meeting of the European Union's 27 ministers, diplomatic sources said.

Several dozen associates of the deposed leader, listed by the new authorities in Tunis, may face similar sanctions in the following days, diplomatic sources added.

"In consultation with the Tunisian authorities, the council has adopted restrictive measures against individuals responsible for misappropriation of state funds," a ministers' statement said.

Tunisia's former leading couple and their inner circle are suspected of having pocketed much of the country's wealth over years and of taking personal stakes in much of the economy.

The EU, the ministers added, "pays tribute to the courage and determination of the Tunisian people and their peaceful struggle to assert their rights and democratic aspirations."

The bloc, they said, will resume talks begun under the Ben Ali regime in May 2010 to offer Tunisia a special status in its ties with the EU enabling tariff cuts to boost trade and better cooperation with the union.

An EU mission flew to Tunis on Monday to assess the situation on the ground and the country's new foreign minister Ahmed Abderraouf Ounais is due in Brussels on Wednesday for talks.

Welcoming Tunisia's pledge to hold elections as soon as possible, ministers offered political as well as technical support in preparing and organizing the polls.

The EU, the statement added "is also ready to mobilize every instrument at its disposal to help ease the passage of political, economic and social reform."

The recent turmoil in Tunisia and the wave of anti-government protests in Egypt dominated the regular meeting of foreign ministers in Brussels amid pressure for Europe to speak up on the upheaval in its Arab neighborhood.

EU foreign affairs chief Catherine Ashton is to meet the Tunisian minister on Wednesday as well as Yemen's foreign minister to urge one of the Arab world's poorest countries to move forward on the road to democracy and to offer assistance to that end.