Bellemare to Fransen: Lebanese Law Applicable in Defining Crimes, STL to Resort to Int'l Law Only if Necessary 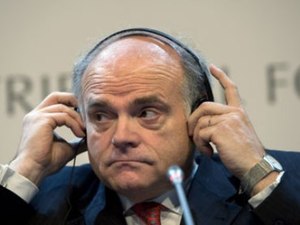 Special Tribunal for Lebanon Prosecutor Daniel Bellemare on Monday responded to the "preliminary questions of law" raised by Pre-Trial Judge Daniel Fransen after the prosecutor filed a confidential indictment in the Hariri murder for confirmation.

Fransen is tasked with confirming the charges in the indictment filed under seal by Bellemare on January 17, and is allowed to ask the tribunal's organs questions of a legal nature in the process of doing so.

On January 21, the pre-trial judge requested written briefs from the prosecutor and Head of the STL Defense Office Francois Roux on the questions related to "the applicability of international law with respect to the notion of terrorist acts; the notion of conspiracy; and the constitutive elements of intentional homicide with premeditation and attempted intentional homicide with premeditation."

Bellemare responded by saying that "reliance on international law" to address the aforementioned legal questions is "not required, and would not be consistent with the spirit, object, and purpose of the (tribunal's) Statute."

"The Statute is the source of the Tribunal's subject matter jurisdiction, including applicable crimes," he clarified.

He noted that according to Article 2 of the tribunal's Statute -- which refers to "the crimes of terrorist acts, conspiracy, and intentional homicide -- the Lebanese Criminal Code is applicable.

However, Bellemare added that "if necessary to fill in any gaps that may remain … the Tribunal may resort to international law, after having exhausted the general rules and principles on interpretation of the Lebanese law and Lebanese jurisprudence."

"If the Tribunal does so, the test as established by other international courts and tribunals provides guidance," he added.

The practice of the International Court of Justice (ICJ) and Permanent Court of International Justice (PCIJ) has derived a test that can be applied by other international courts when interpreting the laws of a particular country.