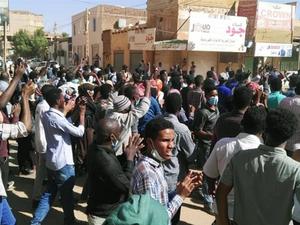 As angry protests pile pressure on Sudanese President Omar al-Bashir to step down, key powers are standing by his regime to ensure stability in a strife-torn region, analysts say.

Demonstrations that erupted in the provinces last month after the government tripled the price of bread have escalated into nationwide protests that analysts say pose the biggest challenge to Bashir since he took power in an Islamist-backed coup in 1989.

But despite bloodshed that Sudanese authorities say has claimed 22 lives, outside players ranging from Gulf rivals Qatar and Saudi Arabia to major powers China, Russia and the United States all see an interest in the 75-year-old staying at the helm.

"All camps in the region are at each other's throat, but somehow they agree on Bashir," said Abdelwahab al-Affendi, author and an academic at the Doha Institute for Graduate Studies.

"They seem to favour continuity. They believe that any other alternative might not be favourable to them and to the region."

Egypt, which has deep historical ties with Sudan, has called repeatedly for stability in its southern neighbour, with its commanding position on the Nile on whose waters they both depend.

Relations between Cairo and Khartoum had deteriorated sharply in 2017 over territorial disputes, but in recent months the two governments have ironed out their differences, with Sudan even lifting a 17-month ban on Egyptian agricultural produce.

Arab governments have scrambled to provide support, anxious to avoid any repetition of the upheavals that rocked the region in 2011.

"There has been evidence of tangible support to Bashir... be it from Egypt, Saudi or Qatar," said Affendi.

"These allies are against any kind of successful uprising. They feel that if it happens, then they will be next," he said, adding that the Arab Spring has not been forgotten.

During his long years in power, Bashir has built up relations with all of the region's bickering diplomatic players, through a string of sometimes spectacular foreign policy twists.

Just days before the protests erupted, he travelled to meet Syrian President Bashar al-Assad in the first visit to Damascus by any Arab leader since the Syrian civil war erupted in 2011.

"His foreign policy is in all directions driven by economic pressures," said a European diplomat on condition of anonymity.

The regime hosted Al-Qaeda founder Osama bin Laden in the 1990s, and then developed ties with Shiite Iran before severing them in 2016.

In October 2017, increased cooperation with Washington helped Khartoum get a decades-old US trade embargo lifted.

Washington has still kept Sudan on its blacklist of "state sponsors of terrorism" along with Iran, North Korea and Syria.

And although the US and the European Union do not openly back Bashir, who is wanted by the International Criminal Court on war crimes charges including genocide in Darfur, they work with Khartoum to ensure that "Sudan remains stable", the diplomat said.

Any kind of instability in Sudan could trigger a new wave of Sudanese migrants headed towards Europe, he added.

Sudan's strategic location in the Horn of Africa is a blessing for Bashir, said Amal el-Taweel of the Cairo-based Al-Ahram Center for Political and Strategic Studies.

"I think the international and regional powers will not allow Sudan to fall," she told AFP.

"But a lot depends on how the balance of power shifts on the streets," she added.

"The world also doesn't want to see another new bastion of hardliners that might be created if something like this happens."

Bashir surprised the West when he dumped Tehran for Riyadh in 2016.

The shift was not just diplomatic. The Sudanese leader also sent hundreds of troops to join the Saudi-led coalition battling Iran-linked Shiite rebels in Yemen, in what he called an "ideological" decision.

By doing so, Bashir signalled to Gulf Arab monarchies that he was an asset in their struggle against Shiite Iran.

"In return Saudi and the United Arab Emirates have given Bashir just about enough to stay afloat, although no announcements have been made," said Affendi, referring to financial aid to Khartoum.

For international powers like China, which has reportedly invested billions of dollars in Sudan, the country offers a gateway to the rest of the continent.

"For countries like China and Russia, Sudan is an entry gate to Africa," the foreign diplomat said.

"Be it them or the West, nobody wants Sudan to crumble."