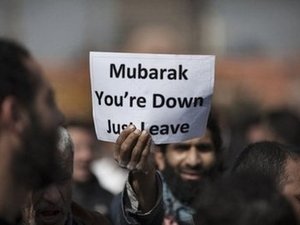 Europe demanded "free and fair" elections in Egypt on Monday as it sought to respond to pressure to speak up on the turmoil sweeping Arab nations on its volatile southern flank.

With Egypt seen as key to stability across the Middle East, European Union foreign ministers demanded President Hosni Mubarak kickstart an "orderly transition" that stopped short of asking him to step down.

A declaration adopted by the EU's 27 ministers called for a step-by-step approach, starting with a broad-based interim government and culminating with a democratic vote.

"The council urges Egyptian authorities to embark on an orderly transition through a broad-based government leading to a genuine process of substantial democratic reforms, with full respect of rule of law, human rights and fundamental freedoms paving the way for fair and free elections," it said.

The ministers also regretted the loss of life and demanded the release of protesters who have been detained over the past days as well as the restoration of communications networks.

Originally scheduled to focus on troublespots Tunisia and Belarus, the one-day talks were overtaken by concern over the situation in Egypt, with ministers due to review their policy options on the region late into the night.

The crisis in Egypt throws up "problems that are very serious and complex, not only for Egyptians but for all the region," said Portugal's Foreign Minister Luis Amado on arrival.

"The EU needs to face these realities; we need a more comprehensive approach. We will begin today to discuss the situation; it will be the beginning of a very important reflection."

The possible rethink of European policy comes as the EU faces loud criticism both for failing to see -- or not wanting to see -- the writing on the wall across the Mediterranean, and for doing too little too late there.

"The EU has been dithering to respond to events in its neighbors despite this being indicated as its priority foreign policy area," said Rosa Balfour of the European Policy Center think-tank.

Because of misguided belief that "status quo equals stability," Tunisia's repressive regime was one of the least criticized by the EU, while its economic performance won it promises of special trade ties with the bloc.

When the uprising ejected Tunisian leader Zine El Abidine Ben Ali, the EU was caught napping as a U.S. envoy hit the ground running to offer Washington's help in the turbulence, days before Brussels sent in its own man.

The ministers Monday slapped an assets freeze on Ben Ali and his wife. Wednesday, the EU looks at a boost in economic ties when the North African nation's new foreign minister flies in on what may be his maiden overseas trip.

The same day, Ashton will meet Yemen's foreign minister to urge one of the Arab world's poorest countries, also facing protests, to move forward on the road to democracy and offer the bloc's assistance to that end.

Due to Egypt's key historical role in Middle East peace efforts, Europe's foreign ministers held off from delivering a sharp rebuke to Mubarak or calls for him to stand down.

Diplomatic sources said however that there were differences of opinion over whether he should be encouraged to leave after 30 years in office.

Germany's Guido Westerwelle said Europe had little elbow-room for maneuver, needing to ensure stability in the politically volatile region while remaining true to its principles.

"On the one hand it's about the process of democratization; it's necessary and has to be supported by us. On the other hand it's important that radicalization is impeded," he said.

"It's important that we not only keep an eye on the process of democratization but as well on the stability of the whole region.

"Between these two poles our political engagement is located."