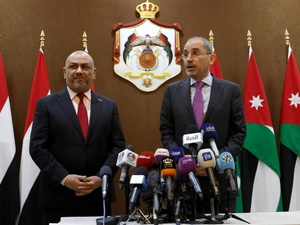 Jordan says it has agreed to host U.N-brokered negotiations between Yemen's warring sides about a prisoner exchange.

The kingdom's Foreign Ministry said on Tuesday that Jordan accepted a request by the special U.N. envoy for Yemen to host the talks but did not say when they would be held.

Yemen's four-year war pits Iran-aligned Houthi rebels against an internationally recognized government supported by a Saudi-led coalition. In peace talks in Sweden last month, the sides agreed to a series of confidence-building measures, including an exchange of thousands of prisoners.

Implementation has been slow, marred by violence and ongoing distrust between the sides.

Last week, a Houthi drone attack on a military parade in the southern port city of Aden killed seven people, including the government's military intelligence chief.