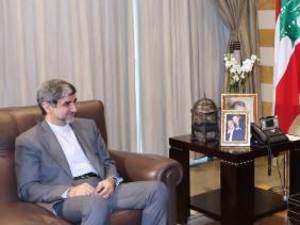 “We support all efforts aimed at forming a government led by Saad Hariri and we do not link it (the government) to any foreign developments,” Firouznia said after meeting Hariri at the Center House.

Hoping the government will be formed as soon as possible, the envoy expressed his country's willingness to consolidate ties in all fields.

Tuesday's is Firouznia's first visit to the Center House since his arrival in Lebanon in August.

The PM is simply trying to show that he is in control here asking when Iran will release the so called political prisoner(s). Firzouni is by defacto the ruler in Lebanon so he can tell the usurped PM what to do and when to do it.