Sudan Reinforces Khartoum ahead of March 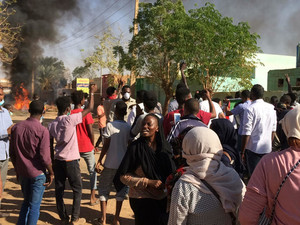 Sudanese security forces deployed in numbers in Khartoum on Thursday as demonstrators threatened to march on President Omar al-Bashir's palace to demand his resignation after a month of escalating protests.

Simultaneous protests were called in 11 other cities, including Atbara, a farming town in the east where demonstrators first took  to the streets on December 19 to protest against a government decision to triple the price of bread.

The demonstrations have since escalated into broader protests against Bashir's three-decade rule that have triggered clashes with the security forces which have left at least 24 people dead, according to officials.

Amnesty International said last week that more than 40 people had been killed and more than 1,000 arrested.

An AFP journalist saw security personnel, many in plainclothes, stationed across the downtown area of Khartoum and along the expected route of Thursday's march.

Several army vehicles mounted with machine guns were stationed outside the palace.

Little traffic was seen at what is usually the height of the morning rush hour as people stayed off the streets.

The protest movement has been spearheaded by the Sudanese Professionals Association, a trade union representing doctors, teachers and engineers among others, that has stepped into the vacuum created by the arrest of many opposition leaders.

Despite the crackdown, the movement has escalated into the biggest threat to Bashir's rule since he took power in an Islamist-backed military coup in 1989.

The protesters accuse Bashir's government of mismanagement of key sectors of the economy and of pouring funds into a military response Sudan can ill afford to rebellions in the western region of Darfur and in areas near the border with South Sudan.

Sudan has suffered from a chronic shortage of foreign currency since the south broke away in 2011, taking with it the lion's share of oil revenues.

That has triggered soaring inflation that has seen the cost of food and medicines more than double, and frequent shortages in major cities, including Khartoum.