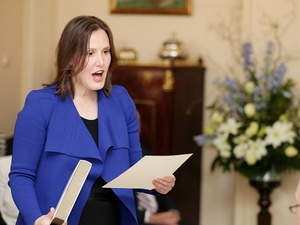 Australia's minister for women is set to retire from politics, a major blow for the embattled minority government amid accusations it has a problem with female representation ahead of crucial national elections.

Cabinet minister Kelly O'Dwyer -- the latest in a string of female politicians to quit the ruling Liberal-National coalition -- said Saturday she would not recontest her lower house seat at the upcoming poll, due by mid-May.

Just a few months ago, O'Dwyer was reported by Australian media as warning in a closed meeting that the Liberals were widely viewed by voters as "homophobic, anti-women, climate-change deniers."

O'Dwyer -- one of six women in the coalition's 23-person frontbench -- said her decision was made for personal reasons and that she wanted to spend more time with her children.

"There will be some who try and use my announcement today to advance their own agendas and I absolutely do not want that," she told reporters.

The surprise departure of the senior MP is a massive setback for Prime Minister Scott Morrison and his coalition, already reeling from poor opinion polls, criticisms about its lack of gender diversity and numerous scandals.

Most recently, married Nationals MP Andrew Broad said he would not recontest his seat after becoming embroiled in a scandal involving a "sugar baby" online dating service -- where an older man pays to maintain a high-end lifestyle for a younger, beautiful companion.

Former deputy prime minister Barnaby Joyce, who was the Nationals leader, stepped down from his leadership roles in February after the married father-of-four had an affair with one of his young advisers.

"I actually accept the point that we need to attract more women into our party... We need to do more in that regard," he told national broadcaster ABC Sunday, adding that a woman had been chosen to run in Broad's seat.

O'Dwyer was a supporter of former moderate PM Malcolm Turnbull, who was ousted by the more right-leaning Morrison in a party coup in August.

Since then, Morrison's government has lurched from crisis to crisis, and lost its one-seat parliamentary majority in October after losing Turnbull's vacated seat in a by-election to an independent.

Its hold on power was further eroded when one of Turnbull's supporters, Liberal MP Julia Banks, said she was quitting the party to become an independent.

Several high-profile Liberal women had also said during the battle to oust and replace Turnbull that they were bullied and threatened to vote a certain way.