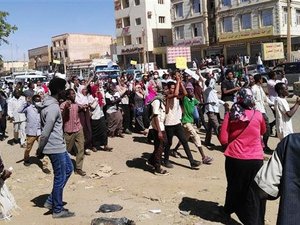 The demonstration, which came ahead of planned nighttime rallies later Tuesday in both Omdurman and Khartoum just across the Nile, was the latest in more than a month of escalating protests against the three-decade rule of President Omar al-Bashir.

Bashir, who has made defiant appearances at loyalist rallies in Khartoum and other cities, was due in Qatar to seek the support of his longstanding Gulf Arab ally.

Chanting "overthrow, overthrow" and "freedom, peace and justice," the catchword slogans of the protest movement, the demonstrators had gathered near the home of their dead comrade.

The doctors' branch of the Sudanese Professionals' Association (SPA) said he had died on Monday from wounds sustained when demonstrators clashed with security forces in Khartoum on Thursday.

The SPA has taken the lead in organising the protests after hundreds of opposition activists were detained, and its doctors' branch has taken casualties.

Human rights groups say that several medics have been among more than 40 people killed in clashes with the security forces since the protests erupted on December 19.

The authorities say 26 people have been killed, including at least one doctor, but blame rebel provocateurs they say have infiltrated the protesters' ranks.

The mushrooming protests are widely seen as the biggest threat to Bashir's iron-fisted rule since he took power in an Islamist-backed coup in 1989.

Triggered by the government's tripling of the price of bread, which brought demonstrators onto the streets of the eastern farming hub of Atbara and other provincial towns, the protests rapidly spread to the metropolis and other big cities as people vented their anger against the government.

A chronic shortage of foreign currency since the breakaway of South Sudan in 2011 deprived the government of most of its oil revenues, has stoked spiralling inflation and widespread shortages.

Experts say cash injections from the Gulf states, led by Qatar, have helped stave off economic collapse and Bashir was due to hold talks in Doha on Tuesday seeking further support.

But his efforts to blame the United States for Sudan's economic woes have fallen on increasingly deaf ears as people have struggled to buy even basic foods and medicines.