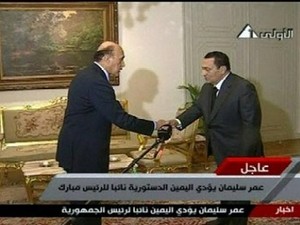 Egypt's new Vice President Omar Suleiman said on Monday that President Hosni Mubarak had tasked him with opening "immediate" dialogue with the opposition amid raging protests against the regime.

"President Hosni Mubarak has tasked me with opening immediate talks with the political forces to begin a dialogue around all the issues concerning constitutional and legislative reforms," Suleiman said on state television.

He also said the government would move to "deal as soon as possible with the priorities of fighting unemployment, poverty, corruption and reach the required balance between wages and prices."

For a seventh day, protesters flooded downtown Cairo on Monday, rejecting a new government under President Hosni Mubarak in the biggest challenge ever to his three decades in power.

Organizers announced an indefinite general strike and promised a "march of a million" in the capital on Tuesday, and in the second city Alexandria, after a week of revolt in which at least 125 people have been killed and thousands hurt.