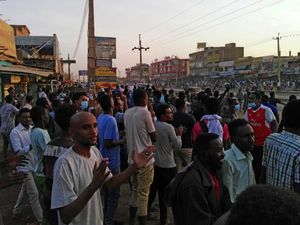 Sudanese police fired tear gas at hundreds of protesters trying to march on the presidential palace in Khartoum as anti-government demonstrators raised pressure on President Omar al-Bashir to resign with calls for nationwide rallies on Thursday.

The east African nation has been rocked by more than a month of deadly protests triggered by the Bashir government's decision to triple the price of bread.

Protesters chanting the movement's catchcry of "Freedom, peace, justice" have been confronted by a crackdown that has drawn international condemnation, including from the United States which has warned Sudan it could damage moves to improve their ties.

The mushrooming demonstrations are widely seen as the biggest threat to Bashir's iron-fisted rule since he took power in an Islamist-backed coup in 1989.

Officials say 26 people have died in the violence, but human rights groups have put the death toll at 40.

The Sudanese Professionals' Association that is spearheading the protest campaign has upped the ante with a call for nationwide rallies on Thursday.

The SPA has called for rallies in 17 places in Khartoum and Omdurman -- the capital's twin city on the west bank of the Nile River -- from where demonstrators were told to march towards the palace.

On Thursday, hundreds of protesters began demonstrating in the capital's Burri district but riot police immediately confronted them with tear gas, witnesses said.

"Let's die like martyrs or fight for their rights," shouted men and women as they took to the streets in Khartoum, witnesses said.

Protests have also been called on Thursday in other towns and cities, said the SPA, an umbrella group of unions representing doctors, teachers and engineers.

Riot police fired tear gas at protesters in Omdurman, and rallies were reported in the state of Jazeera, the Red Sea town of Port Sudan, in a village in North State and in the state of Gadaref, witnesses said.

In Port Sudan a security agent from the country's powerful intelligence service -- which is leading a crackdown on anti-government protests -- was killed late Wednesday in skirmishes with a group of soldiers, police said.

The reason for the fighting was not immediately clear but police said Thursday that commanders of both groups later stopped it and the situation was "under control."

Witnesses said several villages along the highway connecting Khartoum with the central city of Madani also saw protesters taking to the streets.

Thick black smoke from burning tires and rubbish billowed into the sky from Burri.

"Today, the police are using less force but even if they use more force we don't care," said a demonstrator without revealing his identity for security reasons.

"We will achieve our mission of overthrowing this regime."

Several previous attempted marches on the presidential palace have been broken up by riot police firing tear gas.

Several corporates and business outlets in Khartoum ordered their employees to leave before the protests began, while many schools saw few children attending classes.

The demonstrations come with Sudan battling an economic crisis driven by soaring inflation and a shortage of foreign currency.

Bashir, 75, has remained defiant and rejected the calls to step down. He has blamed the violence on "infiltrators" among the protesters.

The veteran leader has accused the United States of causing Sudan's economic woes, but his words have fallen on increasingly deaf ears as people have struggled to buy even basic foods and medicines.

The United States imposed a trade embargo on Sudan in 1997, and it was lifted only in October 2017.

On Wednesday, Washington called for an investigation into the deaths of protesters, warning Khartoum that excessive force against demonstrators and intimidation of the press and activists would jeopardize relations.