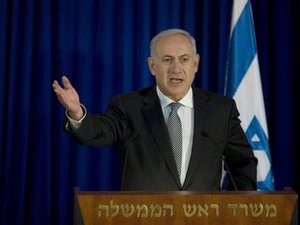 Israeli Prime Minister Benjamin Netanyahu on Monday warned of the dangers of an Iranian-style regime arising out of the political chaos sweeping through Egypt.

"In a time of chaos, an organized Islamic group can take over the state. It happened in Iran and it also happened in other places," the Israeli leader said at a press conference with visiting German Chancellor Angela Merkel.

His remarks were made as the Egyptian regime wrestles with a wave of unprecedented anti-government protests, which have pitted hundreds of thousands of demonstrators against the regime of embattled President Hosni Mubarak.

Although it was not extremist elements that provoked the instability in Tunisia or Egypt, the fear was that they could exploit the political vacuum left by the collapse of the ruling power, Netanyahu added, saying he was being updated about developments "every half hour."

"Every one hopes that this will be resolved peacefully, that stability will return and peace will be maintained," he added.

In Iran, mass protests against the Western-backed shah erupted in January 1978 and he was forced out a year later, leaving a power vacuum that was grasped by the exiled Ayatollah Ruhollah Khomeini who returned to set up the Islamic Republic.

Since then, the Iranian regime has become Israel's most virulent enemy, with its President Mahmoud Ahmadinejad repeatedly predicting the demise of the Jewish state.

The volatile situation in Egypt, which comes hot on the heels of the revolution in Tunisia that ousted president Zine El Abdine Ben Ali, has sparked fears in Israel about the loss of its closest regional ally, Mubarak.

"Our goal was and is to maintain the peace (with Egypt)," Netanyahu said. "None of us want to go back to those difficult days (before the treaty)," he said.

"We are all watching with concern and hope that the peace will be maintained."

The Egyptian uprising played center stage at talks between the two leaders, a source close to the German government said, adding that Merkel urged Netanyahu to "urgently" address the deadlocked peace negotiations with the Palestinians in light of the volatile situation in Egypt.

"We are meeting in troubled times and because of that, it is even more important to get on with the peace process," Merkel told reporters, referring to both the Egyptian unrest and the Israeli-Palestinian conflict.

"In the next days, it will be even more important to act wisely, especially regarding the peace talks," she said. "Negotiations have to be restarted as soon as possible. Standing still is not a rational option."

The next few months, she said, would be of "decisive importance" for the peace process.