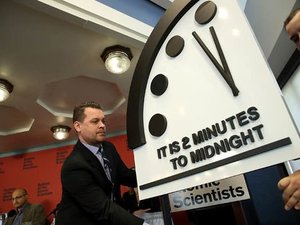 How close is human civilization to destroying the planet? The symbolic Doomsday Clock is still two minutes to midnight, as close as it has ever been, said the Bulletin of the Atomic Scientists on Thursday.

The clock did not budge from last year, but that "should not be taken as a sign of stability," said Rachel Bronson, president and CEO of the group of scholars and international experts in security, nuclear, environmental and science fields.

The risk of nuclear war, the rising pace of climate change, and mounting information wars and fake news are all key concerns in what Bronson called "The New Abnormal" on Earth today.

Robert Rosner, professor in astronomy and astrophysics at the University of Chicago, described this as "the disturbing reality in which things are not getting better."

"The fact that the Doomsday Clock's hands did not move is bad news indeed," he said at a press conference in the US capital.

Last year it moved from two-and-a-half minutes before minutes to two minutes, as near as it has ever been to the hour of the apocalypse, largely based on concerns over the possibility of nuclear war with North Korea and "unpredictability" from US President Donald Trump.