Hariri, Jumblat to 'Coordinate in Face of Syrian Escalation' 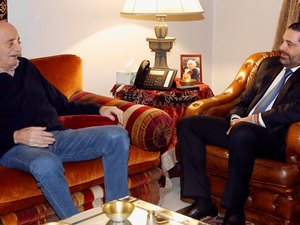 Prime Minister-designate Saad Hariri and Progressive Socialist Party leader ex-MP Walid Jumblat have agreed to coordinate their actions in the face of the latest Syrian “escalation” against them, media reports said.

“They have agreed to coordinate, especially in the face of the Syrian escalation against them, and specifically after the Syrian regime’s claims that Hariri, Jumblat and Lebanese Forces leader Samir Geagea were financing terrorism,” informed sources told Asharq al-Awsat newspaper in remarks published Sunday.

The two men held a meeting in Clemenceau on Wednesday after which Hariri announced that “a lot of attacks have been launched” against him and Jumblat in recent months and noted that they were “closing ranks.”

Jumblat meanwhile lashed out at the pro-Damascus, Hizbullah-backed Consultative Gathering – a new grouping of six Sunni MPs which has insisted on getting a seat in the new government.

“It seems that some forces who have revived themselves do no care about the economy and it seems that these forces want to weaken Lebanon's economic and social structure but we will not allow them,” Jumblat added.

The Consultative Gathering has repeatedly criticized Hariri since it was formed several months ago, whereas Jumblat sees the reconciliation between his pro-Syria Druze leaders Wiam Wahhab and Talal Arslan as being targeted against him.

Jumblat, Hariri and their two parties have also claimed that the latest security incidents in the Chouf region had been orchestrated by Damascus.