Race for 'Hypersonic' Weapons Heats Up as France Joins Fray 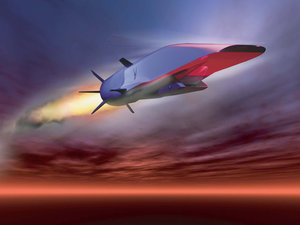 World powers are vying to develop so-called "hypersonic" weapons that travel several times the speed of sound, with France the latest to join a field led so far by Russia and China.

Hypersonics are like missiles that travel at over five times the speed of sound (Mach 5) but are able to maneuver in mid-flight, making them much harder to track and intercept than traditional projectiles.

France is the fourth of the five permanent U.N. Security Council members to join the so-called "stealth by speed" contest, after China, Russia and the United States.

"We have decided to issue a contract for a hypersonic glider" that can travel at over 6,000 kilometers/hour, Defense Minister Florence Parly said last week, promising a test flight by the end of 2021.

"Many countries are acquiring them (hypersonic weapons) and we have the know-how to develop them. We could no longer afford to wait," Parly said, unveiling project V-MaX (Experimental Maneuvering Vehicle).

In March last year, Russian President Vladimir Putin stunned Western military analysts -- and many in Russia -- by unveiling plans for a new arsenal of hypersonic weapons which he said would render missile defense systems obsolete.

Putin insisted the weapons would only ever be used in self-defense, but his presentation featured video montages of missiles crossing the Atlantic, sparking jitters among NATO members.

A few months later U.S. President Donald Trump threatened to walk away from a key arms control treaty with Moscow.

France has already carried out studies on propulsion systems for hypersonic flights as part of a 37 billion euro ($42 billion) revamp of its nuclear arsenal.

Under the V-MaX project, being led by ArianeGroup -- a joint venture between Airbus and France's Safran -- the air-to-surface ASN4G missile, which will replace the medium-range ASMP, could possibly be configured to travel at hypersonic speeds.

"These (hypersonic) weapons could constitute an instantaneous threat of a conventional or even nuclear strike," France's inter-ministerial Secretariat for National Defense and Security (SGDSN) wrote in a 2017 report on next-generation technologies.

Hypersonic gliders would be carried to the end of the earth's atmosphere by a launch vehicle and would then "glide" back to a target on the ground.

"The goal is high-speed maneuverability. That's how it differs from a ballistic trajectory," the French government's defense procurement and technology agency (DGA) said.

"Once the initial speed is reached, we can play with speed and altitude to move up and down, to the left and to the right, creating a trajectory that is more difficult to intercept.

And, the agency added: "If we are targeted by a defense system, we can operate evasive maneuvers."

In December, the Kremlin touted the capabilities of its new hypersonic glider, aptly named "Avanguard".

The Kremlin said that in tests the intercontinental projectile reached 27 times the speed of sound -- 33,000 kilometers (20,500 miles) per hour or Mach 27.

"At this speed not a single interceptor missile can shoot it down," Deputy Prime Minister Yury Borisov boasted.

China has also reportedly carried out several successful tests since 2014 of a glider that can reach speeds of between Mach 5 and Mach 10.

The United States, which is developing several hypersonic programs, is also studying the feasibility of creating a space-based interceptor system, in which an orbiting craft of some sort would be equipped with missiles that could destroy an incoming warhead while it is in space.

"The U.S. will now adjust its posture to defend against any missile strikes including cruise and hypersonic missiles," President Donald Trump said in January, releasing a review of the U.S. missile defense network.

For France, developing and deploying a device that can withstand hypersonic speeds poses an enormous challenge.

The DGA, the French defense agency, admitted that it had "relatively little experience" in the area.

"The first use will probably not be for several years, and will be limited in terms of payload, flight time and precision," the SGDSN cautioned.