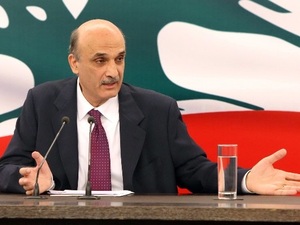 Lebanese Forces leader Samir Geagea on Thursday announced that his party will cede the culture ministerial portfolio to Speaker Nabih Berri in order to “facilitate” the formation of the new government.

Geagea made his announcement as Berri was meeting with President Michel Aoun and Prime Minister-designate Saad Hariri in Baabda ahead of the announcement of the cabinet's line-up.

At a press conference, the LF leader said his party wants the administrative development portfolio in return for giving up culture, after reports said that he prefers keeping the information portfolio.

Geagea however stressed that the LF's approval is conditioned on an “instant” announcement of the cabinet's line-up.

“Some political forces had impeded the formation of the government through unfair demands, putting all the burden on the shoulders of the PM-designate and the President. And until the last moment, some tried to blackmail the PM-designate over certain portfolios,” Geagea added.

“The LF has never hesitated to sacrifice for the sake of Lebanon,” he said.

He also noted that the LF has chosen the administrative development portfolio because “there are preparations to launch an e-government,” adding that the LF has prepared proposals and draft laws in this regard.