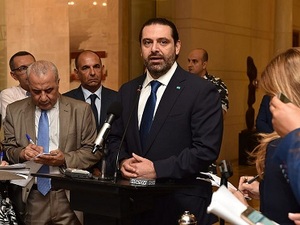 Prime Minister Saad Hariri stressed in remarks on Saturday that solidarity between the new Cabinet’s components are the major “success recipe” to face the challenges ahead.

“It is time for work. We have many challenges ahead that we have to face. Solidarity is essential for our National Unity government in order to confront the challenges,” said Hariri following the first meeting of the new Cabinet in Baabda.

“We have to take some difficult decisions mainly those related to the laws development, reduction of squandering and corruption in addition to facing the regional challenges,” he added, as he urged political forces to set differences aside.

Lebanon's new Cabinet has held its first meeting and the country's leaders vowed to deal with the political and economic challenges the country faces.

The meeting was held at the presidential palace near Beirut on Saturday and attended by the 30 Cabinet ministers as well as the president and prime minister.

The Cabinet formed a 10-member committee whose job will be to draft a government policy statement that will be read in Parliament ahead of a vote of confidence.

President Michel Aoun was quoted by his office as telling the ministers that "there are many challenges ahead of us that we have to face," adding that there is no time to waste.

Solidarity with whom sir? Only 49% voted in May, 51% of the people feel only disdain towards the political class.