Hariri to Jumblat: We Want to Rescue State, Send Corruption Guardians to Retirement 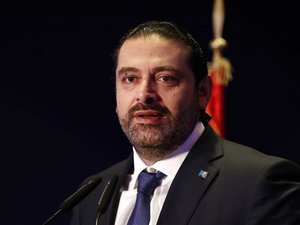 Prime Minister Saad Hariri on Monday hit back anew at Progressive Socialist Party leader ex-MP Walid Jumblat, telling him that “tweeting does not make a policy.”

“Certainly the state is not our property, but it also does not belong to any leader or party. Our project is clear and aims to rescue the state from collapse and send the guardians of corruption to retirement,” Hariri tweeted, in response to a tweet by Jumblat.

Earlier, Jumblat hit out at Hariri and Free Patriotic Movement chief MP Jebran Bassil, saying that the state is not their “property.”

“The thing more important than the CEDRE conference is to pinpoint the sources of public money waste and smuggling and to reject any hike in electricity fees,” he added.

Earlier in the day, Hariri said he was determined to work relentlessly following the monthslong gridlock, assuring that nothing will stop him despite “criticism” against his new government.

“Criticisms against the government began and we haven't even started working yet. I am determined to work and won’t be affected by any attempts to stand in my way,” Hariri’s media office quoted him as saying.

“The citizen will finally be the top priority, after a nine-month-long formation delay. I will work day and night to compensate for the time wasted during the formation process,” he added.

Discouraging any attempts aiming at hampering the government’s work, he said he is eager to ease any difficulties.

And in an apparent jab at Jumblat, Hariri criticized the “exploitation of leaderships,” adding that “if anyone thinks that he can undermine the citizens, I tell him that it won’t happen.”

boohoo really spoken like a prime minister from a kindergarten.

“The citizen will finally be the top priority"????? Really after years and years of electoral promises from Harriri and the rest of the thieves now the PM claims the citizen actual has a priority? and of course were supposed to know beleive him as a change of heart due to his good will?
Sorry for all you Mustaqbal supporters out there but if this is the leadership that you ties your hats onto then all I can say is Allah yur7amak ya Raifq el Hariri you were the last in your family. Maybe Bahia has a better chance at leadership.

"Send Corruption Guardians to Retirement"
Retirement?? Really?? Excuse me.. Shouldn't they be going to jail?
This is why we are here today. No one is held accountable. They steal and then they let them go home with all the money they stole.