As Hariri-Jumblat Row Heats Up, Soaid Calls for 'Opposition Front' 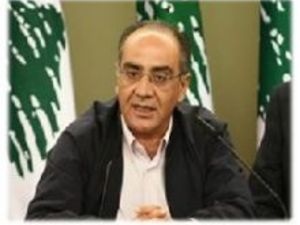 The former coordinator of the March 14 General-Secretariat, ex-MP Fares Soaid, on Tuesday called for forming an “opposition front” against Prime Minister Saad Hariri, Foreign Minister Jebran Bassil and Hizbullah, as an unprecedented war of words between Hariri and Druze leader Walid Jumblat continued to flare up.

“I understand the dismay of certain political parties over the firmness of the alliance between PM Hariri and President (Michel) Aoun-Bassil and I call on them to rise up, seeing as they have parliamentary blocs, they are leaders of respectable parties, they own media outlets and they enjoy Arab and foreign ties,” Soaid tweeted.

“There is one path towards opposition – confronting Hizbullah's weapons. The rest is secondary,” the former lawmaker added.

MP Hadi Abu al-Husn meanwhile said that “Lebanon cannot bear new fronts but rather solidarity for the sake of rescuing what's left of the state.”

“We will see where we will be in the government,” the said in an interview on MTV.

“We will be in a confrontation against any additional attempt at wasting public money or at harming the political system and the Taef Accord,” Abu al-Husn added.

“We will be with those who agree with us, and those who are against are free in their choice,” the lawmaker went on to say.

Jumblat has escalated his stances against Hariri and the Free Patriotic Movement in recent days, engaging in an unprecedented war of words with the premier.

Ties between the former allies have been strained over several files.

Jumblat was reportedly dismayed after Hariri refrained from informing him that Ghassan Atallah of the FPM had been allocated the ministry of the displaced during their meeting on the eve of the new government's formation. A pro-Damascus figure has meanwhile been allocated the refugee affairs portfolio.

Political sources told Asharq al-Awsat newspaper in remarks published Tuesday that Jumblat is seeking to strengthen his relations with his “allies” amid the confrontation with Hariri.

“Jumblat intends to enhance his ties with the Marada Movement and the Lebanese Forces and he has already started moves in this regard,” the sources said.

And the soup gets spicier, who the heck wants to watch daytime Turkish or Syrian soaps on t.v. when we have our very own and "unique" sharq el awsat and the return of Ali Babab and the 30 thieves.