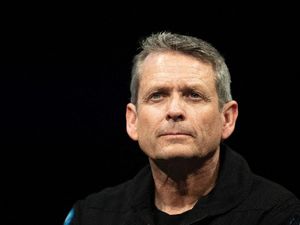 Mark Stucky fought in the Iraq war, once buzzed a Soviet warplane over the Sea of Japan and has flown all sorts of experimental aircraft.

Now, his dream is a taste of routine and repetition: to make the same trip as often as possible, in the same aircraft, ferrying six wealthy passengers into space.

"Forger", as he is nicknamed, is a test pilot for the space travel company Virgin Galactic, founded by British billionaire Richard Branson.

Flying an aircraft called SpaceShipTwo, for a few minutes on December 13, 2018 he flew across the boundary into space over the Mojave Desert in California.

It is this kind of flight that Virgin Galactic hopes to make available on a weekly basis to rich customers, some day.

"This is a test pilot's dream," said Stucky, a 60-year-old former Marine with short gray hair.

"I want to do every flight," he added, although he will have to share them with other Virgin test pilots until flights get going on a regular basis -- not before the end of the year, even if all goes well.

Reaching space remains a complex and dangerous feat. A friend of Stucky flying for Virgin died in 2014 after a wrong command in midair caused the aircraft to disintegrate.

Since then the program remains in the test phase. Branson said it will be far enough along in July for him to take a place on the spacecraft. But in this industry delays are common.

Stucky says he would love to take his family along on one of the flights.

"Oh, definitely," he said in an interview with AFP.

He was in Washington to receive "astronaut wings" from the government aviation agency FAA for private sector crew who have flown beyond 50 miles (80 km) above the surface of the earth. That is considered the edge of space for the United States, although the international norm is 100 km.

His co-pilot Frederick Sturckow also received the honor. Only two previous flyers of the predecessor to SpaceShipTwo, who went up in 2004, have garnered such wings.

"There will always be some level of risk because you're going to space. That should not be taken lightly," said Stucky, who has spent most of his working life flying planes for the army and NASA before joining Scaled Composites, a Virgin partner, in 2009.

"Only time will tell. There's always this one bad flight separating you from being a hero to a goat," he said.

Stucky added: "Humankind needs a percentage of people that do go out and explore and pave the way for the masses to follow, but I don't think everybody should do it."

SpaceShipTwo looks like a rocket fitted with wings. It is carried into the air by a large plane that drops it like a bomb, roughly at the altitude at which commercial aircraft travel.

A few seconds later, the pilot ignites the engine and the spaceplane becomes an actual rocket for a minute, blasting straight up -- so high that the view stretches from Baja California in Mexico to the San Francisco Bay Area.

Then, in absolute silence, the passengers experience weightlessness and float for a few minutes. Soon gravity kicks back in and SpaceShipTwo heads back down to earth, like a cannonball. Stucky and his co-pilot ease the gliding craft into the Mojave Air and Spaceport.

Some say such missions are no big deal -- just going way, way up, and less tricky than flying in orbit around the earth. But Stucky begs to differ.

"I don't think it's a dead end technology. I think it's a way to democratize space for many, many thousands of people. If you want to go orbital right now, you open up space for a handful of extremely wealthy billionaires," he said.

For the first 600 people who have signed up for such flights, the fare is a cool $250,000. Sales have stopped but Virgin Galactic has said the price will go up when reservations reopen.

Virgin Galactic has a rival in Blue Origin, owned by Amazon CEO Jeff Bezos, who wants to send people higher, up to an altitude of 100 km.

But any idea of a space race is taboo.

"If they beat us, it doesn't matter to me too much, as long as they beat us not because we were lazy. I want us to do the best that we can, but be safe," he said.

He said there is one drawback in his new job: being stuck in the cockpit.

"I wish I could go in the back. I really want to unstrap and float around," he said.