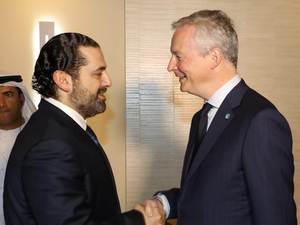 French Finance Minister Bruno Le Maire on Sunday reassured Prime Minister Saad Hariri during a meeting in Dubai that Paris is committed to pay what it had pledged at the CEDRE economic conference.

“We discussed the means to implement the reforms in Lebanon and I wanted to stress to PM Hariri that France fully supports the implementation of these reforms,” Le Maire said after the meeting.

He also said that Paris is committed to dispensing the funds that were agreed on during the CEDRE conference.

“France is here today to make sure that Lebanon will benefit in a good way from this aid and that it will endorse the reforms that it had committed itself to,” the minister added.

how lovely were committed are we? the same level of commitment you and your ruling class has brought to the Lebanese in delivering the very basic elements such as water and electricity? that kinda of commitment and I am sure the western world beleive in you and your banana republic too...
Truly what does the world think of the Lebanese when they are exposed to this leadership?