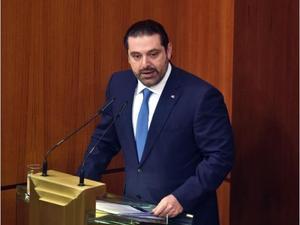 Prime Minister Saad Hariri recited the Cabinet’s policy statement on Tuesday during a parliament session dedicated for a government vote of confidence.

Hariri recited the policy statement, saying: “We want it (the new government) to be a government of deeds, a government that addresses the suffering of the Lebanese and the aspirations of young people and prioritizes the political and security stability and social security of all Lebanese.”

“We have a non-recurring opportunity for salvation and reform, and this opportunity rests with all partners in power and with positive integration with the role of the opposition,” he added.

“The Taef Accord is the basis for maintaining stability and civil peace and the only regulator for relations between constitutional institutions. We affirm support for the military and security institutions to combat terrorism,” Hariri said reciting the statement.

He added that the government “adheres to the policy of dissociation that does not harm Lebanon’s relations with the Arab countries.”

The government will “work on approving the 2019 budget and commitment to reducing the budget deficit by at least 1% per annum over 5 years by increasing revenues and reducing spending.”

The statement also stressed: “The need for Lebanon to distance itself from external conflicts and to respect the Charter of the Arab League, and the adoption of an independent foreign policy based on Lebanon's supreme interest and respect for international law to preserve the country as a peace forum.”

The statement also said that Lebanese citizens have the right to "resist Israeli occupation and repel its aggression." This was in reference to the right of Hizbullah group to keep its weapons.

You are not kicking the Syrian embasador out of Lebanon for his government accusing you of supporting terrorism?

Same feces different day. Aren't the same politicians who have these great plans the ones who got us to this miserable state in the first place?

We have a Non-Recurring Opportunity to close blablablablablabla's deep and wide luv tunnel and prevent him from using it to finance shiism and terrorism.

The 11 billion dollars aid is anything but salvation. It’ll finish off a country already on its knees. These reforms the international community ask of us will take away our uniqueness . The banking sector will no longer protect the banking secret and so on. Switzerland had to do it, then the money disappeared in Panama, the Virgin Islands etc. It’s extortion and neocolonialism.

"Reciting Policy Statement"
Stop making a mockery of yourselves. You are bunch of stooges from the president all the way down to the last parliament member.
When Syria, Iran or Saudi tells you to vote and accept, you will do so... nothing has changed. Lebanese people are worthless. They can never decide for themselves. You are all coward and bunch of low life thieves.... Go steal

are you still CEO of 3 companies listed on the stock market?

A few things people are in awe over: