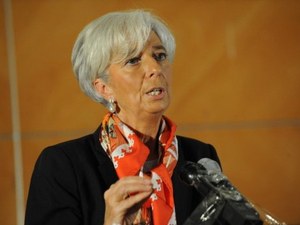 The euro is unlikely to "vanish" this year, IMF chief Christine Lagarde said Friday, but warned a report this month will show the global economy growing slower than the 4.0 percent estimated in September.

"Will 2012 be the end of the euro? My answer is, I don't think so," she told a press conference during a visit to South Africa. "The currency itself is not likely to vanish or disappear in 2012."

"Will Greece quit the euro zone in 2012? The euro partners have affirmed reaffirmed their determination. We can only support that," she said.

But she warned that the crisis was taking a toll on Africa and the rest of the world, with the International Monetary Fund set to release a report around January 25 that is likely lower the global growth forecast.

"It should be revised downwards. We will come out with figures around January 25, 26," she said.

"We should be prepared for a 2012 that will not be an easy journey, but one of effort and focus (regarding) the European crisis and its resolution," Lagarde said.

"African countries are a critical part of the global economy," she added, in a nod to her hosts.

"These countries will suffer setbacks if the European crisis is not addressed," she said, after a meeting with South African Finance Minister Pravin Gordhan.

"We will be vigilant in 2012 in respect to anything that looks like domestic protectionism, or countries not adopting an international cooperative approach, which is in our view absolutely necessary," she added.