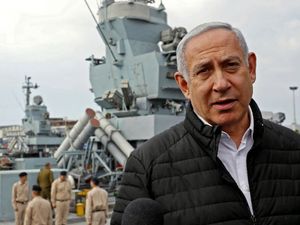 U.S. and Israeli leaders gathered Wednesday in Warsaw for a conference they hope will pile pressure on Iran, as Britain held out hope for progress on Yemen's humanitarian crisis.

Starting with a dinner at the Royal Castle in Warsaw's old town, the two-day meeting has set a vague goal of promoting "peace and security in the Middle East" but is as notable for its absences as its attendees.

Tehran branded the conference a failure even before it started, saying that the United States was trying to speak on behalf of other countries rather than exchange views.

"It is another attempt by the United States to pursue an obsession with Iran that is not well-founded," Foreign Minister Mohammad Javad Zarif told a news conference in Tehran.

"The Warsaw conference, I believe, is dead on arrival," he said.

Iran earlier summoned the ambassador of Poland, which is eager to please the US amid worries over a resurgent Russia.

Poland has since taken pains to say that the conference is not directed at Iran and that it joins the European Union in supporting a 2015 agreement under which Tehran constrained its nuclear program in return for promises of sanctions relief.

President Donald Trump bolted last year from the deal negotiated by his predecessor Barack Obama, calling it "terrible," and instead reimposed sweeping sanctions aimed at strangling the Iranian economy.

Netanyahu, speaking as he headed to Warsaw, said that Israel launched new military strikes Monday against Iranian-linked sites in Syria, where Israel is adamant about eliminating the presence of Tehran and its ally Hizbullah.

"We are operating every day, including (Monday), against Iran and its attempts to establish its presence in the area," said Netanyahu, a longtime hawk against the clerical regime which refuses to recognize Israel's existence.

The sole senior official from a major European power to attend is British Foreign Secretary Jeremy Hunt, who said he wanted to focus on ending the crisis in Yemen.

Several million Yemenis are on the brink of starvation and the country has suffered one of the worst cholera outbreaks in modern times as Saudi Arabia and the United Arab Emirates -- backed by the United States -- seek to bomb and blockade Iranian-linked Huthi rebels into surrender.

Hunt -- whose country is also a major arms supplier to Riyadh -- met Tuesday evening in Warsaw jointly with U.S. Secretary of State Mike Pompeo and senior officials from Saudi Arabia and the United Arab Emirates.

Hunt said he hoped to expand on a seven-week ceasefire that has largely held in the crucial port city of Hodeida.

"We now have a shortening window of opportunity to turn the ceasefire into a durable path to peace -- and stop the world's worst humanitarian crisis," Hunt said.

"Real progress has been made to reach a political solution but there are also real issues of trust between the two sides," he said.

Russia -- a major player in Syria as Trump withdraws U.S. troops -- is shunning the conference and will hold parallel talks Thursday in the resort of Sochi with Iranian President Hassan Rouhani and Turkish President Recep Tayyip Erdogan.

In Warsaw, Turkey said it will only send embassy staff to the conference among its NATO allies.

The Trump administration has insisted that it wants changes in Iran's policies in the Middle East but that it is not looking to topple the regime -- which began to emerge 40 years ago this week when the Islamic revolution toppled the pro-U.S. shah.

Yet former New York mayor Rudy Giuliani -- who serves as Trump's personal lawyer but does not represent the U.S. government -- openly called for regime change at a rally in Warsaw with Iran's exiled opposition.

"We shouldn't be doing business with a nation that supports terrorism," Giuliani told the rally of the People's Mujahedin, which is close to U.S. conservatives.

"They should be ostracized. That's what we've done with countries like that," he said.

"I know we're united in that we want to see a regime change in Iran, so that there's a regime that is democratic, that's lawful."

The formerly armed opposition group, whose members fervently back their leader Maryam Rajavi, has carried out attacks inside Iran but was delisted as a terrorist group by the United States in 2012.