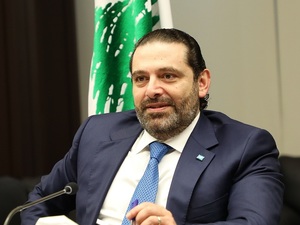 On the eve of the 14th anniversary of the assassination of ex-PM Rafik Hariri, Prime Minister Saad Hariri has stressed that he has not “changed” his political views and stances.

“I believe in moderation and I believe that countries can only be built through moderation and that extremism is the enemy of any progress,” Hariri said in an interview with An-Nahar newspaper's editor-in-chief, ex-MP Nayla Tueni.

Acknowledging that political disputes have “undermined people's confidence in the state,” Hariri told those who have lost confidence in him that he has not “changed.”

“I'm the same person who sought to continue Rafik Hariri's journey with the people in 2005,” he said.

“But the region has changed and so did politics and the divisions... We returned backwards while I'm trying to look forward. We ran into violent events in the region that divided the country and today we are coming out of them,” Hariri added.

“I have not changed my camp, but the regional disputes will not push me to paralyze the country,” he said.

And insisting that “no one can eliminate anyone in Lebanon,” the premier emphasized that “the Lebanese are the ones who choose the axis they want to be in.”

“The foundation of the executive authority is the relation and partnership between the President and the Premier,” Hariri added.

Asked about the recent deterioration in the relation with Jumblat, Hariri said: “The relation with him is good and I understand his fears, but I lament that he does not know how much I am with him.”

And reassuring that the latest row between them has been resolved, the PM added: “There is also a war on me, not only on Walid Jumblat.”

You share your government and time with the very same people behind your father’s assassination. 14 years ago you weren’t like this at all!

You are a HUGE disappointment Saad. Sorry !

Yep, you have not learned a damn thing!